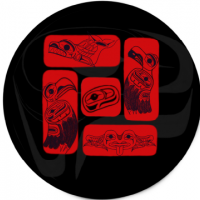 NorLand Limited is committed to building strong and lasting relationships with the members of the communities that we work in, and learning more about the diverse cultures around us who’s Variety Makes Us Strong. That’s why this month, Melanie Russ, a local Haida artist, argillite and jewelry carver, redesigned the NorLand Limited logo using symbols from her Indigenous culture. Melanie has been an artist for her entire life. Creativity came naturally to her from an early age, as both of her parents are also argillite and jewelry carvers, and many other members of her family are carvers or artists as well. She was encouraged from an early age to pursue art, and is currently working as an artist in Vancouver. The NorLand Logo was revamped to include aspects of Haida culture, and using animals from Haida legends. This included changing the NorLand colours from yellow and green to the traditional Haida colours, red and black. These two paints are also two of the oldest colours in human history, having been used in Indigenous culture for over 4,000 years, and dated back through human civilization as far back as 100,000 years.

The animals chosen for the logo are significant within Haida culture. The raven is the trickster in Haida stories, known for being sneaky, incredibly intelligent, and curious. The Raven, or “Wee’git” in Haida, is an important figure in Haida legends. He is involved in many Haida stories, and is often used to teach people about life, and right and wrong. One of the more prominent stories he is a part of is called “The Raven and the First Men.” According to Haida culture, he released the first men into Haida Gwaii, who he convinced to leave the inside an extraordinary clam shell that he’d found. Even though the outside world was scary, he managed to eventually persuaded all of them to leave the shell and join the outside world to become the first Haida People. There is a beautiful art piece showcasing this story by Bill Reid at the Museum of Anthropology at UBC. Apex and Pro-Tech actually helped the Museum of Anthropology to move some totem poles and other works inside the museum in order to implement some seismic upgrades to the building.

The Eagle is known as the ruler of the sky, and has the closest relationship to the creator. He is a symbol in Haida culture for focus, strength, peace, and leadership. Through his ability to fly at great heights, he is able to travel between the physical and spiritual world, and deliver messages to the creator from the Haida people. Eagles are linked closely with prayer, with the sight of the eagle indicating that the prayer has been accepted. Haida people will also hold an eagle’s feather up to the sky during prayer if the prayer needs immediate attention from the creator.

The Killer whale is known to help those in need, and is the symbol for kindness, intelligence, and compassion. It is also a part of Melanie’s crest for her family. The killer whale is known in Haida legends as a supernatural being, and the ruler of the sea. They are also thought to have civilizations that are very similar to Haida civilization on land, just below the surface of the sea. There are many stories that include this, such as a story about a whale that stole a woman from shore with the intention of bringing her back to his village and marrying her.

The frog is a symbol of luck in Haida Culture, as well as cleansing, peace, and rebirth. It is also a sign that it is time to put away your winter activities and prepare for Spring. When a frog is shown in art as touching another creature with its tongue, it is meant as a symbol for sharing knowledge and power. One story explains why frogs are no longer seen on Haida Gwaii. In this story, a bear came across a frog chief, and thought that it would be fun to try to step on him. The frog escaped, but in fear that the bear would find the frog’s village, all of the frogs fled Haida Gwaii, and never returned for fear of coming across another bear.

Part of our shared purpose of Helping Build Enduring Communities, Together is to engage with the communities that we work in, and being open to learning about their cultures. This new logo combines many Haida symbols in their culture, and we are proud to be given the opportunity to use it. We are incredibly thankful for Melanie Russ for giving us her time to create this new logo, and for graciously sharing her culture with us. We would also like to thank our teammate in demolition, Brent Davies, who is one of Melanie’s childhood friends and helped us by reaching out and asking Melanie to take on this project for us.